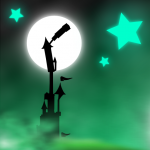 “The Tower of Egbert” is my second mobile game and current project. It’s already released for the platforms Android and iOS.

Story
This is the story of Egbert the Sorcerer and his epic quest to build the most impressive tower the worlds have ever seen.

Like every good sorcerer, Egbert developed his fascination for magic towers early on. Already in first class of wizard school he tried stacking up chairs, pillows, and some of his most loved stuffed animals to something that might be called a building and could compete with the impressive little magic castles that the fourth and fifth graders built in their magic-tower-building classes. Unfortunately his early endeavors were never crowned by any success and slowly but steadily he became the scorn of the school for keeping to it; and although his magic abilities grew and he became one of the most promising scholars the school has seen in years his building skills got worse and worse. He could watch himself getting more clumsy by the year – and so could others. Eventually he became lonelier and lonelier as his classmates turned towards the more successful builders and nobody was interested in his efforts anymore. It was when he almost failed the second magic building class that he decided he had to try a different approach to tower building. He started spending all his spare time on a secret project destined to show the worlds how a sorcerer’s tower should really look like.
Many years passed before the project was finished but finally it came to a satisfying end. Egbert created a connection to an extremely powerful magical being capable of helping him build not only the largest but also the most beautiful tower that has ever been built – you. He managed to create a window through a complicated magic device reaching from his universe into yours, allowing you to help him reach his goal by using your incredible mental skills and your magic fingers.
What happens now is up to you. The story hasn’t been finished yet. Will you decide to help Egbert restore his honor and be a leading example for all the young sorcerers out there struggling to build their very first tower or will you choose to close the portal and leave him alone?

Gameplay
Build a magic tower, one brick at a time. Discover interesting new places, dangerous areas, beautiful scenery, and other surprises as you grow your building towards the endless vastness of space.
Decorate your tower using a wide range of flags, banners, plants and many other deco items; color it and use the built-in screenshot-sharing function to show your creations to the world (using your social media channels or my homepage).
Fight gravity, winds, falling rocks, and other dangers on your way up. Build the greatest tower ever and see if your tower can stand the test of time!